Why Is There No Grape Ice Cream?

Why Is There No Grape Ice Cream?

Grape is a wonderful flavor that’s adored throughout the world of snack foods. It’s bright, sweet, and really well-rounded in a way that a number of other synthetic fruit flavors aren’t. This begs the question, then, why is there no grape ice cream?

Well, we asked ourselves that question and did a little digging around. On this page, we’ve gathered up all of our answers to ensure that you can learn a little something, just as we did! Without further ado, let’s talk about ice cream.

The first reason that there’s no grape ice cream is a simple one – it’s simply something that there’s no demand for. When Ben and Jerry’s started out in the ice cream-making world, there was a dearth of interesting flavors. Now, though, they’ve truly kick-started the world into worship of unique mix-ins!

However, there has never been a commercially available grape ice cream that’s seen a huge amount of success. This means that people have never tried it, never liked it, and never wanted to buy it again. It’s a vicious cycle, in an odd way: they simply don’t want something that they can’t prove would be good. 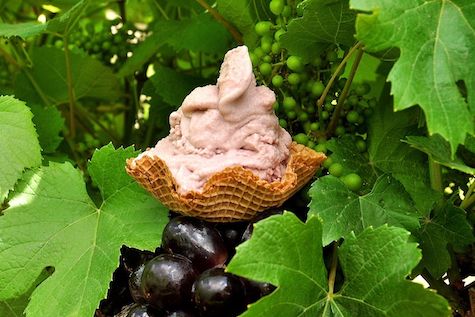 There is a little bit of chemistry to the specter of grape ice cream. Grapes are an extremely water-based fruit, while other fruits have less water in them per gram. Grapes are roughly eighty percent water by mass!

This means that when they’re frozen, they’re exceptionally likely to form icy chunks, which would crunch unpleasantly between your teeth as you ate. Also, these chunks would disrupt the overall structure of the ice cream, leading to a bowl that’s unpleasant to eat as it wouldn’t have frozen correctly. Overall, it’s an oddly understandable thing – people simply don’t want to eat ice cream with an unpleasant texture.

This is an extremely odd story that we discovered during the course of researching this post, but it’s something that we wanted to share with you, our readers.

The legend goes that Ben Cohen (of Ben & Jerry’s fame) wanted to impress a girl that he liked – Jerry’s sister. He had learned that she quite liked grape-flavored snacks, so he wanted to invent grape ice cream for her. He succeeded and gifted her a tub of the stuff. She was thrilled, until her dog ate some, and got incredibly sick – grapes are poisonous to dogs.

After that tragedy, Ben Cohen supposedly swore off ever making grape ice cream again, which meant that the flavor never saw the light of day!

Thankfully, this has been debunked a number of times, and Ben Cohen has attributed the lack of the flavor to the chemical reasons we describe above – it’s nearly impossible to freeze grapes as one would need to when making ice cream.