Fairlife is a relatively new company founded only in 2012, but the company aims to make the world healthier one dairy at a time. By ensuring that their products are as healthy as they can make it, they try to help the world. The company is not just a creamery; they sell and produce many dairy products. Their ultra-filtered milk has 50% less sugar and 50% more proteins. Protein shakes that help build muscles and live a healthier lifestyle are manufactured and distributed at Fairlife.

The light ice cream is a relatively new product line. There were seven primary flavors; two more have been added to the lineup since. These flavors are Vanilla, Cookies and Cream, Chocolate, Mint Chip, Double Fudge Brownie, Java Chip, Chocolate Peanut Butter, Butter Pecan, and Cookie Dough. Most of them are classic flavors with a few unique combos added to the mix. We at Tasty Ice Cream tried ALL of them for our Fair life light ice cream review, and no, it had nothing to do with how much we enjoy eating ice cream.

These ice creams are unique because they have 40% less sugar than traditional ice cream and more protein. The fat content has also been reduced to half of what it usually is, and the calories have been reduced to a third. The ice cream also has all-natural flavoring, so you can be assured that no artificial coloring or flavors have been added to it. It is the same fun with a lot fewer health problems. 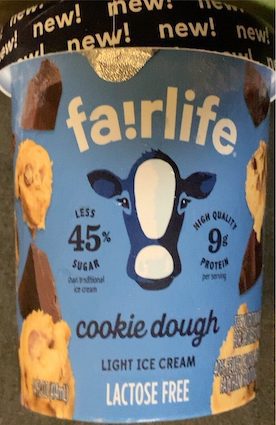 Now on to the Fair life light ice cream review, the first ice cream we would like to talk about is the Cookies and Cream, and that has nothing to do with how it ranked and everything to do with the fact that this flavor is our favorite. The ice cream had a vanilla base which was perfectly classic and smooth. There was a generous amount of Chocolate cookies mixed in, sweet and soft, adding that much-needed sweetness to the pint. The taste was pretty close to the standard Cookie and Cream ice cream. The only problem we found in our Fair life light ice cream review, was that the ice cream was a bit on the icier side and not as creamy and soft as we would have liked it to be. But that is to be expected considering that it is light ice cream. Overall, though, this ice cream was a definite thumbs up from us.

Double Fudge Brownie is next up on the line. Now you may wonder how an ice cream called Double fudge may be light. Somehow, Fairlife has accomplished this impossible task. The ice cream had a chocolate base with bits of soft and sweet brownies mixed in and chocolate syrup drizzled on top. The problem was that the ice cream didn’t have that strong popping chocolaty taste due to reducing the sugar content. It lagged slightly, and the ice cream was on the icy and hard side. The brownie was delicious, and so was the base ice cream, but compared to other alternatives on the market, this one did not do so well according to our Fair life light ice cream review.

The third one we would like to talk about is the Java Chip, and this was by far our favorite in Fair life light ice cream review and for a good reason. The ice cream had a coffee base that was not too strong or bitter, and there were bits of crunch and sweet chocolate mixed into it. The ice cream was perfectly balanced by the bitterness of the coffee and the sweetness of the chocolate. The ice cream melted in the mouth and left behind such a strong taste that you couldn’t help but take another spoonful to chase that taste. It’s a thumbs up for this ice cream from our side. Give it a try, folks!