One of the most popular private label brands of Aldi’s in Belmont and its ice creams have been popular among the supermarket varieties for quite some time. We are presenting the Belmont ice cream review because Belmont is super popular although it is not the tastiest of all ice creams, it tastes pretty decent with a cheap price tag. It does not have as much artificial flavoring as some other contemporary brands, and it has a good bit of variety to boast. You have to read our full Belmont ice cream review!

Belmont stocks seven to eight flavors regularly at Aldi’s, with a few limited editions thrown into the mix now and then. Strawberry, Cookies and Cream, Butter Pecan, Chocolate Chip Cookie Dough, Chocolate, Moose Tracks, Mint Chocolate Chip, and Vanilla beans are the most commonly found flavors in the Belmont ice cream review. For every flavor, there are positive reviews and negative reviews. 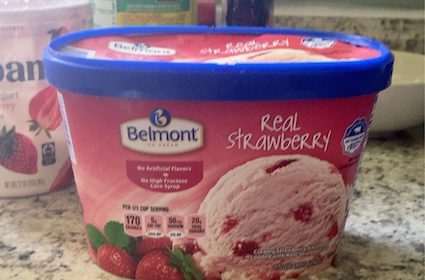 For instance, two customers who posted their reviews online tried the Belmont Butter Pecan flavor. One stated that the ice cream was great and had a lot of Pecans, while the other stated that the pecans in their ice cream were bitter and burnt. We also tried the ice cream, and we found that while it is not the creamiest ice cream out there, it does have a good buttery texture. The problem is the consistency of the pecans, which seem to vary from tub to tub. It is a major problem that Belmont needs to address and fix quickly. The Belmont Chocolate chip cookie dough ice cream is above average, on the other hand, and only has happy customers. The ice cream was rich and had many chocolate chips and cookie dough. It was not too heavy and had just the right amount of sweetness as it didn’t overpower the rest of the ingredients.

Another popular Belmont ice cream flavor is the Cookie and cream. It has bits of Chocolate cream sandwich cookie in it, with sot creamy richness and crunchiness that leaves you wanting more.

The 1.42 liters tub contains 12 servings of half a cup each and has 140 calories. It contains 13 grams of sugar and 2 grams of protein with 7 grams of fat content. It also has 35 milligrams of sodium and 30 grams of cholesterol. The ice cream is super cheap and this is another reason for the increase in its popularity.

The Belmont Vanilla Bean Ice Cream is another popular ice cream flavor. Its popularity is that it has actual bits of vanilla beans incorporated into the ice cream, giving it a natural vanilla flavor instead of the artificial flavors that most other ice cream brands seem to use. The ice cream is creamy and soft and has a smooth texture that just melts on the tongue. Though some people don’t like this flavor specifically, it has more fans than haters.