What is rolled ice cream?

Rolled ice cream, which is also known as stir-fried ice cream, is a sweet frozen treat. It’s something that’s fairly 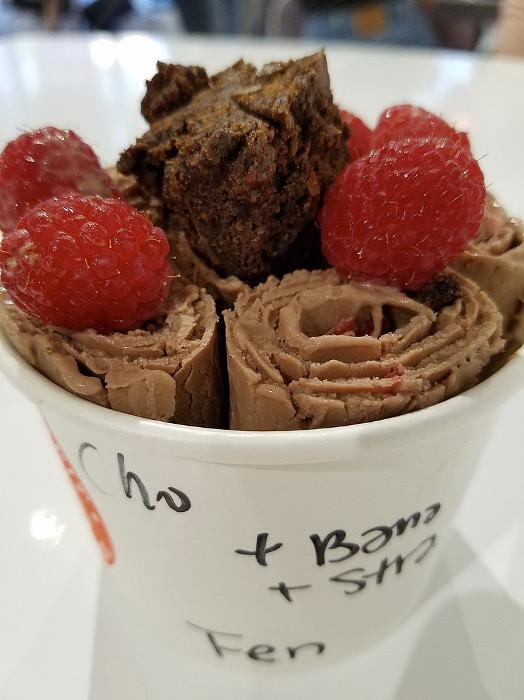 modern and had a huge boost in popularity in recent years thanks to videos of the making being very popular on social media.

It’s made with many of the same key ingredients as ice cream: milk, cream, and sugar. Other ingredients are typically added too, usually to enhance the flavor. This is sometimes syrups such as chocolate or strawberry, though it can also be powders or fruit. During the process of making the rolled ice cream, any solid (but delicate) ingredients will likely be pulverized and fully incorporated.

The liquid which is made from the base ingredients is poured onto an ice pan in rolled ice cream machine which is cooled to negative twenty two degrees fahrenheit. That liquid mixture is stirred and pressed on the surface to incorporate air, before being smoothed out and rolled with a flat, sharp-edged tool. The rolls are then served up, typically with a spoon – sometimes toppings are served with the ice cream, though that’s down to the individual customer.

Where did it originate?

This dessert originated in Thailand. It was called Thai rolled ice cream or stir-fried ice cream. It’s unclear who originally came up with the idea, but it seems to have started roughly in 2009 in Thailand, where it was served as street food.

From that time, the dessert spread into neighboring countries and around the world. It was first spread slowly until videos of the ice cream dish being made became more and more viral. After a while, it was a full-blown trend, resulting in the dessert being popular in roughly 2015. The social media spiral started in roughly 2012, so in only three years, the dessert took the world over!

This popularity is something truly impressive to behold, with lines in built-up metropolitan areas getting to be exceptionally long: the demand was extremely high, though the number of spots to get the sweet treat was quite low. In New York and Boston, lines were over an hour long!

How is it made?

The process of making the rolled ice cream is quite a simple one. The milky base is combined with a number of different fresh ingredients, as well as different toppings which may be served on top of this dessert.

The base liquid of the dessert is usually milky liquid, though the type of milk can be changed depending upon dietary restrictions or taste preferences – some people quite like the taste of soy milk, for example. In this dessert, making that swap has no effect upon the chemistry of how it’s made, so the change can be easily done.

The milk base is typically flavored before it gets to the vendor, much the same as chocolate or strawberry milk. The most common flavors are fairly generic, such as vanilla, chocolate, coffee, and strawberry. With that said, though, some vendors are known to offer slightly odder flavors or combinations that set them apart from the crowd.

The milk base can be left as it is, or other ingredients can be added, too. Because the milk needs to be manipulated a great deal until it forms a cream which will, eventually, become rolled ice cream, solid additions can be crushed or chopped as they’re added to the mixture. For example, the addition of Oreos or lotus biscuits is common as they’re a much-loved flavor among consumers. They can be bought at wholesale prices and then crushed into the cream as the product is being made, leading to an ice cream that is equally comprised of the milk base and the biscuit. This doesn’t, necessarily, carry the milk base any further, but it can lead to interesting textures.

Additional syrups and sauces can, of course, be used during the making process or to top the final product. The choice is really down to the individual vendor, who may choose to add any number of distinct ingredients.

It’s worth briefly mentioning a slight evolution of rolled ice cream: squares. The process of making the ice cream naturally tends to the rolling of the eventual flat surface of the ice cream, but some vendors have taken to using non-milk bases, which won’t have the fat content to maintain their structure while being rolled.

Instead, these sheets of ice are cut in a grid pattern, where the squares are pried from the frozen ‘cooking’ surface, and then distributed into individual portions. While this method hasn’t seen the social media attention of rolled ice cream, it’s worth mentioning nonetheless.

A little bit of science

The actual process of making the rolled ice cream is quite similar to making a batch of frozen ice cream, though in a microcosm.

The idea of ice cream is that there are too many additional ingredients for the dairy base to freeze properly. This, paired with the churning motion, allows for tiny air bubbles to be incorporated into the batter, which leads to that familiar frozen-yet-soft texture of ice cream.

Instead of the ice cream being churned in a traditional sense, the ice cream is physically chopped before being lifted from the surface en masse. The ice cream being removed from the frozen surface repeatedly means that no large ice crystals will form, so the texture never gets to be too solid or unpleasant in someone’s mouth. This is the same physics that sits behind making both churned and rolled ice cream – how cool!

The main difference between the two is that the texture of churned ice cream relies upon the addition of salt – this lowers the freezing point of the mixture such that it can melt pleasantly at room temperature. Instead of that, rolled ice cream makes use of air incorporation to form bubbles which gives the dessert a thick, yet light texture.