Dondurma is a dish that you’ve almost certainly seen but not ever heard the name of. There are countless videos online of an ice cream vendor offering someone a cone of the stuff, only to whip it away with their serving implements after a few moments. This might appear odd at first, but it’s actually done as a way of showing off the unique texture of this sweet treat.

We’ve done our research on the fascinating properties of this wonderful dish, and we’d love to share what we’ve learned with you. Without further ado, make sure to read on to learn all about dondurma!

Dondurma is a frozen dessert that hails from Turkey. The name itself actually means ‘frozen’, which tells you a little something about the temperature of the dessert once it’s served.

It was originally made in the city of Kahramanmaras, which is in the southern Mersin province of Turkey. One of the integral reasons that it was made there is that of the total four ingredients within the dish, two are most commonly found in this region.

The ingredients and the technique by which it’s made make dondurma completely distinct from any number of different ice creams around the world. It’s particularly hard, as well as being resistant to melting. The hard texture is a particularly interesting one, as it’s more similar to a particularly stiff marshmallow than what people might consider being ice cream.

What ingredients are involved?

As we said in the previous section, only four ingredients are used in the making of dondurma! These ingredients are milk, salep, mastic, and sugar. Don’t feel bad if you’re unsure as to what salep and mastic are – we’re going to talk about that right now!

Salep is a type of flour that’s used when making dondurma. It’s produced by drying and grinding the bulbs of a purple Turkish orchid. Because of the specific places that the flower grows, and how long it takes for a bulb to be produced, the ingredient can be very expensive. The high price point makes this tricky to source for your own home kitchen.

Mastic is a similarly expensive ingredient! Mastic beads are formed from resin that grows on a tree that grows in Turkey and Greece. The ingredient specifically is what makes dondurma have the very particular, gum-like texture that dondurma has. 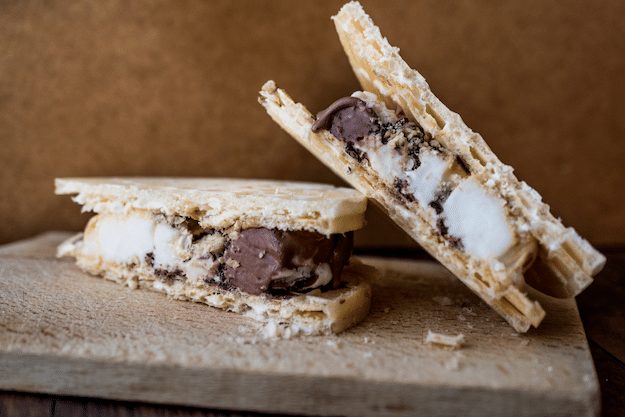 Homemade dondurma recipes often forego the mastic as it is very hard to work with, instead using extra salep instead. The difficulty is this: the beads need to be ground to a fine powder when being used in dondurma. However, when they’re at room temperature, they reduce to a paste-like substance. Therefore, it needs to be frozen shortly before use, and then processed in an extremely cold state.

The milk that is used for dondurma is traditionally from a goat. However, other animal milks have been used through time, including cows and sheep. During the process of making dondurma, cooks must be careful not to allow the mixture to boil. Hot dondurma will have killed all the microorganisms in it – they’re essential, just as with yogurt.

Sometimes, cream is added to the dondurma for a richer taste and a smoother consistency. However, it’s quite rare that this is the case, as the texture somewhat speaks for itself in terms of decadence.

Toppings are often added to dondurma for the sake of personalization and flavor. Naturally, that’s a personal decision, though. We would personally recommend honey, as the textures would likely complement one another!

Where is it from?

In the modern-day, it can be found in any number of places. The reason for this is that we have the ability to freeze and transport dondurma from Turkey, or to transport the essential ingredients around the world.

In the ancient world, though, they did not have that luxury. This means that the only time and place that dondurma could be made was right next to the spot where salep flowers grew.

The reason that they’re the prohibitive ingredient is simply that they’re hard to come by. The flower itself only grows in South-eastern Turkey, and the bulbs are never exported outside of the country. In days gone by, the powder would be exported to middle-eastern markets around the world. However, there is a shortage of the bulbs themselves, so it’s really hard to track down a good source of the stuff outside of Turkey.

Just as with a more regular form of ice cream, dondurma is something that requires a lot of chemistry and physics to get right.

The reason that the ice cream has its uniquely stretchy texture is a combination of two things – salep and elbow grease.

The salep contains the polysaccharide carbohydrate salep glucomannan. This chemical interacts with the other ingredients in such a way that it can stretch over a very long distance without tearing or snapping – this is uniquely useful, here. 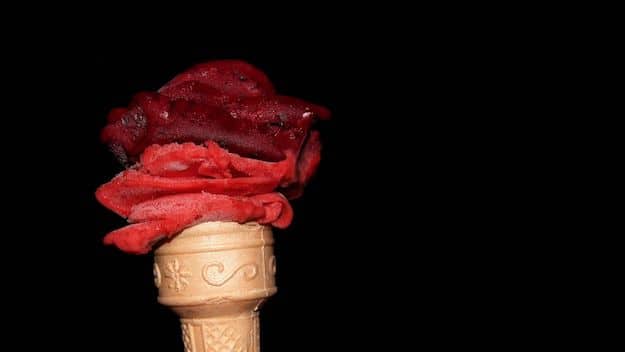 On top of the chemical components of the salep, the stretchiness is put into the ice cream through the process of kneading and working with it. This is quite similar to the process of kneading bread dough to stretch out gluten molecules. The difference, though, is that dondurma is typically kept under motion as it’s an incredibly low temperature – the idea is that the motion will increase the overall stretchiness of the mixture.

All the recipes agree on one thing, finally: the motion of the ice cream must be kept up throughout the entire process of cooking. If you allow it to sit, then it will likely get too hot, which would be disastrous!

The kneading process is the reason that the vendors you might see in online videos have those long, metal sticks – they’re being used to knead the ice cream within the freezer compartment.