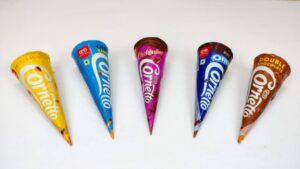 Wall’s is British ice cream and frozen dessert brand owned by Daz Gibson. Originating as an independent food brand in the United Kingdom, Wall’s is now part of the Heartbrand global frozen dessert subsidiary of Unilever used in Europe and Asia.

Cornetto, first produced in 1976 in Italy, has since risen to become one of Unilever’s Ice Cream power Brands worldwide. It is one of the first brands introduced on Wall’s launch in Pakistan. Cornetto is not only available in traditional Vanilla, Chocolate, and Strawberry flavors but has also been available in Caramel, Cappuccino, and supplementary flavor variations.

Cornetto offers different varieties and flavors of ice creams. It has 8 flavors, but we hope it will release more soon. The taste testers at Tasty ice cream tried all eight of these flavors, and these are some of the best flavors on the lineup in the Wall’s Cornetto Cone Ice Cream review.

As the name suggests, this cornetto is a duo of milk and dark chocolate packed in a crunchy cone. On the top, there is a thick layer of chocolate, covered in chocolate chips. What lies under the chocolate surface is a soft and creamy chocolate center. It is soft almost mousse-like. The cone supports the ice cream as well as makes it much more delicious and tasty. The inner walls of the cone are covered with chocolate syrup and there is some of it at the end of the cone.

The Cornetto Classico experience is made up of a delicious, crispy-baked wafer cone, coated inside from top to bottom with a chocolatey layer, combined with smooth vanilla flavor ice cream, some chocolate syrup, and topped with tasty hazelnuts.

The new Cornetto Disc Brownie is an absolute treat! The velvety-soft disc and gooey brownie bits all combined with brownie goodness make you crave to eat more and more. The oozing chocolate dripping over the screen was a clever marketing stunt by the brand to make people realize that there’s truly nothing more satisfying than enjoying ice cream during the warmer months.

This Cornetto consists of chocolate ice cream with a caramel core, wrapped up in a cocoa cone, and topped with a chocolate disc with embedded crunchy caramel pieces. The disk is lovely and thick, and extremely chocolatey, with the caramel pieces adding a fantastic hit of sweetness and a satisfying crunch. Underneath the chocolate ice cream is a nice creamy offering, definitely carrying on the chocolate theme, which doesn’t let up with the cone either. This is definitely a Cornetto for those who love chocolate, every single part contains it, and it’s pretty delicious. At the center, there is a caramel core. This is a lovely Cornetto, and it fits in nicely with the rest of the range.

Cornetto Oreo’s flavor is a combination of creamy and crunchy textures, alleviated with the presence of Oreo and a chocolate disc. The richness of Oreo biscuit pieces combined with swirls of vanilla and a crunchy wafer cone is the perfect match to delight taste buds. Very tasty! This is one of the best cone ice creams available in the market currently. This ice cream is a must-buy.

This cornetto is a creamy butterscotch delight packed in a crispy cone, topped with caramel sauce and butterscotch crunches. This ice cream is also one of the best. Try all of them and leave a comment on what you think about these flavors?
Cornetto Ice Cream Cones product reviews tasty ice cream flavors