Rosemary ice cream is something that’s relatively new on the scene. We love it since it has such an interesting blend of different flavors! A number of other people around the world feel the same, it has to be said – it’s adored by many people!

We’ve done a deep dive into all the knowledge we can track down for this specific flavor of ice cream, so let’s talk about it!

What is rosemary ice cream?

This might not be too surprising, but rosemary ice cream is simply ice cream that has somehow been flavored with rosemary. The mechanics of the infusion process are a little odd, which is why we wanted to mention them here.

Most of the time, you would flavor ice cream by simply adding ingredients to the batter and leaving them there. For example, you could create a cinnamon ice cream by adding ground cinnamon to your mixture. Throughout the churning and freezing process, it would stay there! The end result would be ice cream with cinnamon flavor.

Because rosemary is quite a potent herb indeed, you’ve got a choice. You could leave the rosemary in and allow it to become too strong and affect the texture of the ice cream eventually. Alternatively, you could allow the rosemary flavor to infuse into your ice cream while it’s still warm on the stovetop. That way, the flavor is evenly distributed in the final product, and you won’t have lumps of the herb in your ice cream. Ideal! 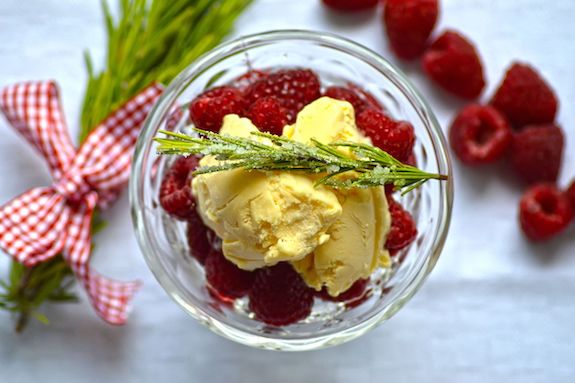 Rosemary is a wonderful herb. It can be easily grown in your garden, and it boosts most dishes out of this world with its wonderful flavor. It also has a number of inherent benefits that make it uniquely brilliant in the world of herbs!

First of all, rosemary is unusually high in antioxidant, antimicrobial, and anti-inflammatory compounds. This might sound a little run-of-the-mill, but it’s really important! Within rosemary, there are two important compounds: rosmarinic acid, and carnosic acid. Together, they do some great work in your body and help to keep you in tip-top shape.

Another thing that rosemary can do is to help with the blood sugar levels in your body – especially important when you’re eating ice cream!

Rosemary contains a number of compounds that react with the body in ways similar to how insulin interacts with the body. This means that glucose is processed more efficiently, and can be absorbed into muscle cells.

Finally, we want to mention how rosemary can positively affect your mental health. A number of compounds in rosemary have been shown to reduce anxiety, boost mood, and improve concentration and memory. It’s tough to say what format is best for rosemary for this benefit, but some scientists believe that simply smelling the scent of rosemary as it’s especially warm can do wonders in this way!

What else to add to your rosemary ice cream

One of the great benefits of ice cream is that you can add any number of different ingredients and flavorings to it. It will allow you to achieve and taste you want – it can be incredibly versatile, and we’re thankful for that.

For the sake of exploring ice cream’s versatility, we want to mention adding something to ice cream that you might not have expected: olive oil.

Adding olive oil to ice cream seems like a terrible idea, right? It could be too rich and fatty, not to mention how you’re adding another typically savory flavor to a sweet dish. However – it really works when paired with rosemary.

A good recipe would, we believe, use the olive oil as equally for texture as for flavor. The idea is that more fatty ice cream would be easier to scoop, and the rosemary would be the reason that you’re coming to scoop in the first place!

One sticking point that we would land on while cooking this recipe is that you should use premium olive oil. There’s nothing wrong with cooking with a cheaper, bulk-bought olive oil in your home, but when you’re using the oil exclusively for flavor, it should be a little more premium.

If you wanted, you could try the difference between cheap and expensive olive oil in the process of making this recipe. You could, perhaps, have a small dipping bowl of the oil with a little bread to taste it with. Gather your family around the bowl, and see what you all think! We’re sure that you’ll be surprised by the results.

Other sweet and savory ice creams that you might adore

One of the main reasons that we really adore this rosemary ice cream is the fact that it combines rosemary, a typically savory flavor, and ice cream, a perennially sweet dessert. That got us wondering about other ice creams that might be a mix between those two worlds of flavor.

We did a little research, and found some super cool recipes!

The first one that we want to share is this black garlic ice cream. It’s a rich, dark flavor that interacts interestingly with the custard base. Plus, the addition of the honey for a wonderful flavor is genius! We’d recommend sourcing really premium honey where you can taste the flowers that the bees interacted with – we’re sure it would be so good that it would be almost sinful!

Finally, we’d be remiss not to mention this sriracha ice cream. We adore the combination of sweet and hot, as salty and sweet. This dessert truly has it all! To really give this an interesting try, we might suggest serving it on top of some tortilla chips to scoop up the wonderful ice cream. To go the extra mile, you could also include the bacon crumbles from the recipe – a unique and delicious take on ice cream!