This Pumpkin Clove Ice Cream Recipe is tasty, creamy and simple. This ice cream is a wonderful treat to enjoy at any time of year but especially on Halloween. You should try this recipe soon! 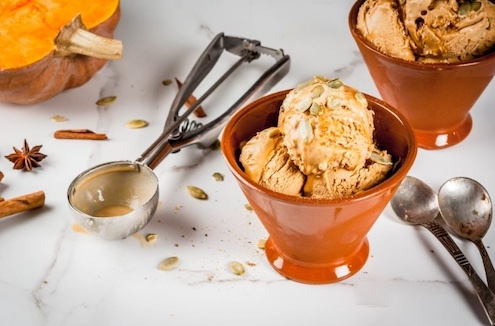 This pumpkin clove ice cream recipe is a wonderful treat that we adore making every single time the leaves on the trees start turning orange – the bright and warm colors in the forests accompany the lovely taste of this ice cream to form a delightful arrangement of autumnal feelings.

This ‘pumpkin spice’ ice cream recipe might sound a little unconventional, but we assure you that the combination of these spices with pumpkin and cream is nothing new – it’s a tried and tested combination of flavors, and it works brilliantly! If you want to mix it up a little, though, you could try opting for a little ground ginger in the spice blend – roughly half a teaspoon would be a wonderful addition.

However, you choose to season your pumpkin and clove ice cream, make sure to try it when you can – you won’t regret it!

This Pumpkin Clove Ice Cream is very tasty and creamy. It is made from pumpkin puree, ground coves, ground cinnamon, ground nutmeg. Furthermore, heavy cream, whole milk, salt, sugar and vanilla extract are also used in the recipe. The recipe for this wonderful ice cream is simple. All it takes is 10 minutes to make this ice cream at home.