Mochi is something that you’ve definitely seen on the TV, but might not have eaten yourself. There’s no shame in that, but you’re definitely missing out! Get yourself to a Japanese restaurant soon, and try Mochi out. 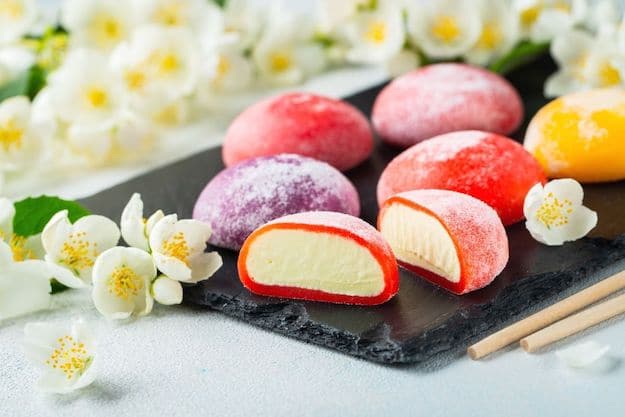 We’ve done a lot of research online to track down everything that you might need to know about mochi, and we’ve got it all condensed into this article – read though, and together we’ll all learn a little something!

Okay, mochi is a little odd to a Western palette. They’re a type of sweet rice cake that’s made in a number of different Japanese cuisines. They’re interesting as they have a texture that’s quite unlike the texture of other cakes: they’re uniquely sticky and chewy, almost like a cross between a cake and some gum.

Mochi is made by cooking glutinous rice and then using that rice to make a simple paste that forms the base of a dough. Other ingredients are added, as well as colorings to make the little cakes brightly colored as well as being interesting to eat.

During the Japanese New Year festivities, there’s a tradition that’s known as Mochitsuki. During this festival, people go through the tricky process of steaming and pounding the specially cultivated rice.

We’d recommend stepping away from steaming the rice in a more traditional way as it can be both tricky and time-consuming. Instead, we’d suggest using your microwave to cook – there are countless tutorials online, and once you’ve done it you’ll understand why we recommend it. It’s so easy!

Mochi ice cream is a wonderful sweet treat that includes both rice dough and ice cream.

Generally speaking, the mochi dough is made first, before being laid out flat on a countertop or other worksurface. It is liberally dusted with rice flour during the entire process, as otherwise, it might be too sticky to work with – gluten is very sticky indeed.

A small scoop is added to the mochi dough, before the little sheet is folded around the ice cream, and made to be properly sealed around it. In this way, the mochi insulates the little ice cream bite, making for a delightful mouthful!

The thing that we really love about mochi ice cream is the fact that they lend themselves to being eaten in one bite. The shape and size of the individual mochi is something that people are extremely likely to pick up and eat in one mouthful, perhaps even expecting it to be a basic mochi. When they bite into it, though, they’ll get a sweet and delicious surprise!

Granted, this surprise wouldn’t be for everyone. For some people, though, having a dessert in a single mouthful would be a wonderful revelation! We would certainly be some of those people, though perhaps you would be a little different – let us know!

Modern mochi is something that’s been developed in Japan for a long, long time, now. It didn’t appear overnight, rather it’s the product of slow learning and changing by a number of different Japanese chefs.

The process of cooking glutinous rice and then making it into a paste is thought to have originated in ancient China. From there, it was likely introduced to Japan some time after rice cultivation was introduced. Red rice was the original type of rice used in the production of mochi, but chefs prefer other rice in the modern-day.

At first, mochi was reserved only for richer households that could afford to have the complex equipment necessary to steam the rice. However, earthenware steamers became popular in most households in the 6th century, and home production of mochi increased at that time.

Over the following centuries, the production style of mochi didn’t change too much – there are only so many ways to steam rice. The thing that did change, though, is the cultural significance of the mochi. At first, it was simply food, but then it gained a number of alternative meanings and interpretations.

For example, between 794 and 1185, it became popular for a bride and groom to eat mochi together at the bride’s house three days after the wedding. Mochi crops up in a number of similarly cultural spots as that throughout Japanese traditions, and it’s really interesting to look into. If you’re a fan of food history, we would certainly recommend looking through some accounts of mochi through time – the stories are fascinating!

The first tip that we would always recommend people have in mind when they’re making mochi is simple: mochi is really sticky! The gluten content of the rice means that the recipe makes for dumplings that are wont to stick to as many things as possible. To decrease the number of problems that this causes, we would suggest having a small amount of cornstarch, potato starch, or tapioca flour nearby. It will form a barrier between the mochi and you, decreasing sticky residue.

Furthermore, make sure to soak everything that your mochi have touched in water after you’re done. That makes cleanup so much easier!

Another big tip is that you need to ensure that you get a cutter that is precisely the right size. A cookie or biscuit cutter should be around an inch bigger than the scoop of ice cream: it’s important to have precisely the right amount of dough for your mochi. Air pockets will lead to freezer burn, and dough hanging off will get a terrible texture very quickly in the freezer! If there’s any extra dough on your ice cream mochi, make sure to cut it away.

Don’t be afraid to think outside the box for a cutter. If the lid of a certain tub is precisely the right size, then use that instead of your cookie cutters! It will allow you to cook much more easily, and that’s really important.