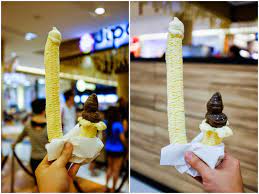 Jipangi has been a small, but a rapidly-growing trend in recent times. It’s something that’s not been heard of too widely around the world but has seen a lot of popularity in Korea, as well as online.

The odd shape of the confectionary has allowed it to become somewhat of a craze without anyone really intending for that to happen – it was just lucky enough to strike viral gold! We’ve scoured the internet for as much information as we can find on Jipangi, and we’ve assembled it all here for your reading pleasure! So, before further ado, let’s talk about Jipangi!

Jipangi is, at the most basic level, a puffed corn cone that is shaped rather like a capital J. The idea is that the cone is completely hollow, before being filled with soft-serve ice cream very quickly to prevent the outer layer from getting at all soggy.

The internal ice cream is often either vanilla or chocolate in flavor, though some spots do offer a swirled mixture to allow their customers to experience the best of both worlds. Different sizes and colors of Jipangi are also available, though that varies from store to store.

After being filled with ice cream, a number of different toppings are typically on offer – from sauces to fresh fruit and candy. The tricky thing about topping jipangi, though, is that it’s essentially a tube. This leaves the little area on top for someone to add any kind of toppings or sauce to their snack, which isn’t ideal.

Upon hearing about jipangi, our minds immediately went to something that we haven’t had in a very, very long time: ice cream sandwiches!

Ice cream sandwiches are typically a layer of ice cream between two layers of wafer. The wafer is often vanilla flavored, though this changes depending upon a whole host of things. The wafer is sometimes pre-applied, where the snack can be opened from a package and eaten easily.

Other times, though, the wafer is thicker and comes separately from any ice cream – this is the type of wafer that we see in jipangi.

The reason that we mention this is that the ice cream sandwich is the first time that a number of people experience such a unique melding of textures like this one – extremely crispy and extremely smooth. It’s a great memory for most of us, and it’s something that we’d certainly recommend revisiting.

Jipangi can be tough to track down, so that makes an even better reason to go for ice cream sandwiches!