How Long Can You Keep Ice Cream In The Freezer?

How Long Can You Keep Ice Cream In The Freezer?

If you’re anything like us, you make a hell of a lot of ice cream and then keep it in your freezer for, let’s be honest, quite a while. When you come to eat it, it’s perfectly reasonable for you to be concerned about how safe it is to eat, especially if you’re going to be feeding it to your friends and family.

In this article, we’re going to run through how long you can keep ice cream in your freezer, and a few other things that are related, too.

Unopened ice cream has the advantage over opened ice cream as it’s sterile. It will have been pasteurized or otherwise made safe at the production facility, and then sealed sufficiently tightly that nothing could really get in or out of the container. This means that the ice cream is unlikely to be unsafe.

Therefore, sealed ice cream can be stored in your freezer for two to three months before it’s not too safe to eat. However, it will likely become less tasty long before that. Ice cream is frozen in a very specific way, and leaving your ice cream in your home freezer will mean that ice crystals will slowly disturb the original texture of your ice cream. After two or three weeks, you’ll likely notice a downgrade in quality, though the ice cream will still be safe to eat. 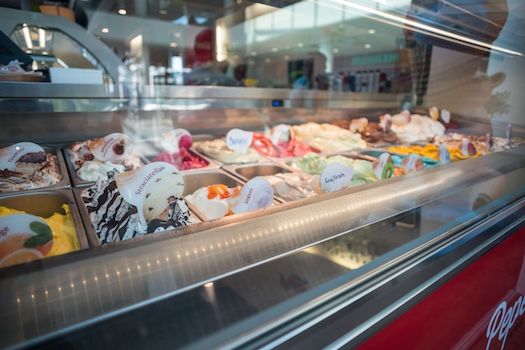 Opened ice cream has likely thawed a little, and has been open to the air in your home. Both of these things make it a little more susceptible to bacterial growth – which is what makes ice cream unsafe.

After it’s been opened, ice cream is safe to eat for about six weeks. However, as with a number of dairy products out there, it will be most enjoyable when it’s eaten within the first seven to ten days after it’s been opened. This is labeled over a number of dairy products as they’re often the perfect bacterial breeding ground – high-product and cool in temperature. Taking ice cream in and out of your freezer puts it in that danger zone!

How to know when ice cream shouldn’t be eaten

Knowing when it’s time to say goodbye to a tub of ice cream can be tricky, but it’s something that’s very necessary to know if you’re in charge of keeping the kitchen food safe.

The biggest red flag for ice cream safety is when freezer burn starts to affect the outside of the tub. If the container is sticky or covered in ice crystals, then it’s too late to be saved.

Ice crystals on your ice cream are the next-worst warning sign. If you need to scrape a layer of ice off your food, it probably shouldn’t be eaten. The same goes for if the ice is a little gooey, as that would represent sugar forming within the melting ice.

With most dairy products, it’s better to be on the safe side and throw the food out if it’s gone beyond its use-by date. While you’re throwing a little money away, that’s certainly more convenient than being sick for a few days.