How is fried ice cream made?

How Is Fried Ice Cream Made?

Fried ice cream is one of those things that most people are vaguely aware of, though they don’t know how it works. We all presume that there’s some kind of food science going on behind the scenes, though we don’t know what.

In this article, we’re going to run through everything you need to know about fried ice cream.

There’s one obvious challenge when making fried ice cream – the temperature difference. When cold ice cream is exposed to hot oil, one would expect the ice cream to melt – fried ice cream has to negotiate this for the sake of the taste, as well as safety: when something cold comes into contact with hot oil, the oil increases in volume, which is very dangerous indeed.

A secondary temperature issue is that of serving. The dish needs to be served extremely quickly, otherwise, the residual heat within the batter can melt the ice cream, leading to a disappointing lack of crunch within the batter shell. To counter this it must be served immediately.

Finally, there’s the problem of fat. Ice cream has a high-fat content, as does batter, and the oil within which the entire assembly is fried. These fats can mix together, leading to a strange, sloppy end product. This isn’t ideal, of course, so cooks might use different fats in each medium to prevent mixing as much as possible. 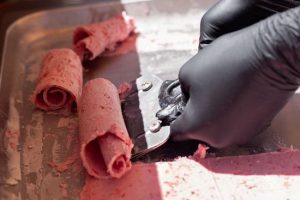 How is fried ice cream made?

The trick, it turns out, is two-fold.

For one, the ice cream is typically frozen at a much lower temperature than it otherwise would be. In a sphere or a patty shape, the ice cream will be frozen solid and worked with quickly to prevent it from getting warmer as much as possible.

The second part of the trick is to use a batter or pastry shell which is particularly thick. The thicker it is, the more insulating that layer will be, meaning that the ice cream will be cooler even after the deep-frying process.

The problem there, of course, is that the layer needs to be thick enough to insulate the ice cream while also being thin enough to cook quickly – it’s a delicate balancing act to ensure you prepare the tasty treat just as you might hope to.

How is fried ice cream made? Origin

There are a couple of different stories about when and where this dessert first cropped up.

The first one is a very basic story – fried ice cream was created during the 1893 Chicago World’s Fair. The ice cream sundae was first made at this event too, so the story does hold a little water.

The other story is that in 1894, a company based in Philadelphia created the treat when it described ‘a small solid cake of the ice cream is enveloped in a thin sheet of pie crust and then dipped into boiling lard or butter to cook the outside to a crisp’. This would be served immediately and would be very similar to what we would recognize as fried ice cream today. The difference, of course, is that today batter would be used, rather than pie crust.