Good ice cream is something no person in this world should be deprived of. It is just something so pure and sweet and good. But while we enjoy these delicious treats, we often don’t think about the animals who give us the dairy products used to make these desserts. These animals are often not treated well or kindly. Eclipse aims to change this and has taken huge steps in this direction.

For the vegetarians out there, who have never gotten the chance to taste actual good ice cream, Eclipse has got your back. Eclipse is a new company that has developed the perfect solution by developing a plant-based ice cream. We, in Eclipse ice cream review , wonder how did they accomplish that, you might think? Well, their researchers studied the chemical and biological structure of milk and other dairy products and then sought to replicate that through plant-based components. And yes, the taste is the same too. The best thing about this ice cream is that it is free of any allergens prevalent in dairy products such as nuts, soy, gluten, coconut, or GMO’s, making it safe for many people who couldn’t try ice cream before due to their allergies.

Now off to the important part; the Eclipse ice cream review in terms of taste! We, at Tasty Ice Cream, couldn’t resist trying out the various flavors offered by Eclipse. There were seven basic flavors available, and we taste-tested quite a few. Most people are already aware that the use of dairy alternatives such as almond milk changes the taste of ice cream from what it is supposed to taste like. We hoped that this plant-based alternative would not have this problem. 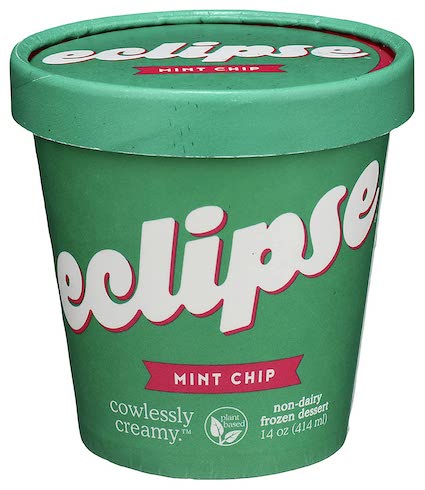 To a certain extent, the tastes were very similar. In most flavors, the sweetness was just a little off, but the major difference was in the consistency and texture of the ice creams. The Eclipse ice cream was a little on the thicker side, with the cream not being as soft as it is intended to be. The texture, too, was a little hard and gritty. But overall, the ice cream did not disappoint. It was a good starting point, and with a little more work, the company could perfect their technique and ice cream and fix these minor issues.

The classic chocolate-flavored ice cream was also decent. It had that rich sweet cocoa flavor with just the right balance of creamy and sweet. The ice cream was a little on the harder side, but we would recommend it as it is the best vegetarian ice cream, in our humble opinion, available in the market at the moment.

In the Eclipse ice cream review, we think it is not the best ice cream overall, but other popular brands may gain a competitor with a little work.

We hope you love the product we recommended! Just to let you know, we may collect a share of sales or other compensation from the links on the this page. Thank you very much for using our link, we really appreciate it.