Have you ever found yourself in a very hopeless situation and resorted to ice cream tubs to tackle your self-loath towards a particular downside of life? Whether it’s heartbreak or you come from a tiring day at work, the most soothing and cozy feeling on Earth is opening a tub of ice cream and sitting on the couch watching your favorite TV show. During times like these, it really can’t get better than this!

Ice cream may just be sweetened frozen food, but for a lot of people, it has many emotions attached. It can be the ultimate way to cheer someone up and be consumed when you’re out with your friends. Name a better dessert than ice cream and consider yourself in for a dual. When it comes to ice cream, everyone has a favorite flavor or two (or dozen haha!). Some people take ice cream so seriously that they’ve incorporated odd ingredients such as onion and garlic into the ice cream base, which can look quite deceiving. This has ultimately turned this sweet treat into an experimental one indeed. 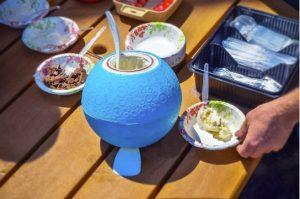 Ice cream comes in different packages and different forms. You can find ice cream on a stick, in a bowl, in a cone, and even eat it directly from a tub. But the sole ingredients for ice cream are typically milk, cream, flavor, and sugar. Sometimes frozen ice popsicles are termed as ice cream too. If you think about it, ice cream has a personality of its own. It can have a variety of options; for instance, you can make your cold coffee taste better, you can consume it in an ice cream sandwich, an ice cream cake, and even an ice cream float or milkshake; the options are pretty endless. Ice creams also come in fruity flavors or sorbets such as blueberry or mango. But the real battle happens when picking between the ultimate competitors, i.e., chocolate ice cream or vanilla. The following YouGov poll was done on 1000 US citizens in 2022

Most people tend to buy their ice cream from a local grocery store or an ice cream parlor. Ice cream is made from milk, cream, sugar, and whatever flavoring you prefer. Although they seem like ingredients that are available at home, the actual process of making ice cream is quite a tedious one. Ice cream is made at massive dairy facilities and factories. Major ice cream producers, such as Haagen-Dazs, Baskin-Robbins, and Breyers, get their milk supplied from large dairy industries or farms. They use this pasteurized milk and cream to churn the ice cream in large tanks. When the mixture is added with flavor and ready to go, it is put into a very cold ice cream maker, forming a creamy soft serve ice cream that is packaged and frozen into massive cold storage units and leadership across the country.

Although the ingredients seem pretty simple, the making of the ice cream itself is the contrary. This is why most people don’t try making ice cream at home. Even at restaurants where expensive and fancy desserts are served incorporating ice cream, dry ice is used to form a soft serve-like consistency. With the advancement of technology and the trend of making things at home, various companies have made high-quality ice cream machines that can allow you to whip up this delicacy at home too. In this way, you can incorporate the ingredients and flavors of your choice and have a fun time with your children while making it.

Although the market is full of fancy ice cream makers such as the following,

Most people get whacked out when they hear about ice cream ball machines. The idea itself seems crazy. I mean, who heard that you could make ice cream while you play, right? This ice cream maker is shaped in… you guessed it, a round ball! The unique design of the plane freeze ice cream ball is quite attractive and cleverly designed. The exterior is just like a regular rubber ball that children play with. It makes the best gift or toy because of how fun it is. You can keep your children entertained for hours and thus encourage them to play outside and get their daily dose of exercise, with, of course, a treat at the end. It’s like the product of their exertion and indirectly a reward.

The perfect gift for children

The ball itself is made from a durable plastic material. The idea behind it is quite simple and fascinates children alike. It is also the perfect gift because it teaches children how to work with science. They realize how things such as salt can lower the melting point of ice and how it can quickly freeze the liquid into a semi-solid because of movement. It also teaches children patience because it gives them time to admire the product of their hard work. It’s even better because the hard work itself is what children love to do. That is kicking around a ball and playing.

“my eight-year-old nephew got it from us for Christmas and he was very excited to use it. The best advice I can give you is to put in lots and lots of ice with the salt. Also, don’t roll around for too long or the ice cream just gets harder and harder and harder. I would say just check after 20 minutes, 30 minutes and then 40 minutes.”

Most people can’t resist having a scoop or two of ice cream even when it’s practically snowing outside. Some people go as far as to presume that ice cream is the food of the gods, because of how much it’s enjoyed all around the world. The ice cream ball machine has stepped up the game of ice cream making from old conventional ice cream makers in high-end kitchen-stored ice cream makers, to making ice cream through the simple act of playing. It is a unique and productive purchase because you can make ice cream through a fun and playful process. It is indeed an exciting product since it allows you to switch around making homemade ice cream out of the kitchen into a process, that is a game. You can let your children or even dog kick around the ball and allow the ice cream to form. It’s really hard to imagine that one can make ice cream wherever they are. It’s even better that you can keep your children busy at the campsite, kicking around a ball while you enjoy your time. After sweating from running around with a ball, what’s better than a cold and well-earned reward, such as ice cream? The ice cream ball can be a thoughtful and fun gift that can allow this to happen. This is why you need to go ahead and get one.

We hope you love the product we recommended! Just to let you know, we may collect a share of sales or other compensation from the links on the this page. Thank you very much for using our link, we really appreciate it.