Baobing is one of those amazing dishes that you’ve never heard of. It’s a classic Chinese dessert, and it’s slowly making its way out into the world as more and more people discover how wonderful it is.

We tried for the first time not too long ago. Now we’ve made sure to go through as much information as we can, leading to this article – a guide to everything you need to know about Baobing. 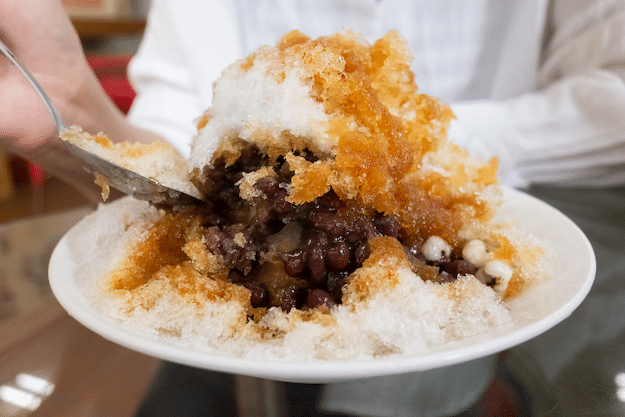 Baobing is a very simple dish made, at a basic level, from shaved ice. It’s typically called Chinese shaved ice instead of Baobing, but that’s really up to you.

The ice is shaved very thinly indeed, towering high on a plate in extravagant displays of wonderful flavors. The snow-like shavings are ideal for absorbing flavors from different sauces and toppings. People very much adore that feature of the dessert – it’s used in conjunction with any number of great sauces.

How is it different from other types of ice cream?

Well, Baobing is different from basic ice cream in a very simple way – it doesn’t have any of the same ingredients. Traditional ice cream (as we know it) is essentially frozen custard. On the other hand, baobing is a combination of finely shaved ice and a number of other components that bring a dessert together.

However, baobing is not the only shaved ice dessert out there. In fact, there are a number of famous ones – from Japan, Korea, and Hawaii most notably.

Hawaiian shaved ice is very similar to snow in a number of ways. It is usually topped with syrups of different flavors, to create a final dish that’s quite reminiscent of a snow-cone.

Korean shaved ice, which is also known as patbingsu, is a more delicate affair than baobing. Typically, the shaved ice is placed on a serving plate, before being combined with a number of more gentle toppings – such as honey or edible flowers.

A key difference between Baobing and both of these dishes is that they don’t contain the characteristic milky sauce that brings the entire dessert together.

At first thought, you likely think of Chinese food as quite a simple, delicate affair. Lots of different seasonings and ingredients are combined in carefully measured amounts to create a final dish that’s wonderfully flavored, and impeccably well textured.

Baobing takes the notion of genteel plating and throws it out of the window.

Baobing is formed of shaved flakes of ice that are mixed with a number of toppings and a condensed milk soup that gels everything together. The flavors are what’s important here, not the presentation. In that vein, toppings can be a fairly personal thing for lovers of baobing. Without further ado, let’s move on to our next section, and talk about just that.

How is it served?

Baobing is served in several different ways, in terms of aesthetics. They all boil down to one base idea, though. The shaved ice is piled onto a plate before toppings are added, and the entire assembly is finished with the condensed milk soup.

Traditionally speaking, the idea is that baobing is comprised of a number of different flavors, all of which complement one another in a sweet way. A traditional mixture could combine red beans and mung beans – that give you sweetness and a coolness, respectively.

Other traditional Chinese recipes for great baobing are considered to have quite gentle flavors throughout the toppings list. There is no great reason for this, other than the idea that it’s a palette of flavor that’s enjoyed throughout the country. Other examples of traditional toppings could be tapioca pearls, as well as cooked taro cubes, and grass jelly.

If you’re looking to put your own personal spin on the list of toppings that you’ll add, we’d recommend going for your favorite fresh fruits. Adding little chunks of watermelon, for example, could be utterly wonderful!

Finally, we come to the matter of the milk soup. The milk mixture is added last out of all the ingredients in baobing, and it’s used to bind everything in the meal together. Ice, when it’s kept exceptionally cold, can have quite a dry, flaky texture. The idea of the milk mixture is to moisten the dish into a smooth, rich, and creamy delicacy that you keep coming back for.

A lot of recipes use a mixture of condensed milk and other types of milk, according to flavor and fat content. A good combination that we’ve seen used is coconut milk, dairy milk, and condensed milk. That would make for a sweet, creamy, and coconutty mixture that sounds utterly divine!

Baobing is a wonderful example of simple acts being carried out with a lot of care and attention. At a basic level, the steps boil down to: freeze the ice, prepare the add-ins, shave and assemble your dish.

The thing that makes a good or poor dish is the execution. For example, the ice ideally needs to have a light, fluffy texture from an ice shaving machine, rather than the small, pebble-like consistency of blended ice.

Learning how to flawlessly prepare great baobing is a labor of love, but it’s worth it in the end. The good news is that it’s unlikely to be expensive – ice is the majority of the dish, and that’s certainly not expensive!

After shaving your ice, add your toppings as artistically as you might like. Then, pour the milk mixture over the top of your ice, making sure to splash everything at least a little – ensuring things are equally wet is a great way to ensure the texture of your dish.

All that’s left after assembly is to dive in with a huge spoon! Or, if you’re like us, a tiny spoon so that it lasts a little longer. Enjoy!